So I’ve been trying for a while to get RSSI to properly display on my OSD using a D4R-II through my Flip32 (this should work for a true Naze as well).   So after trying multiple ways, I was shown a post of how to inject RSSI into the ppm stream to feed into the Flight Controller (thanks Robert).  Below I’m going to attempt to explain how I accomplished it.  This was done with no special wiring just some Taranis magic.  I used a D4R-II, Flip32 (running Cleanflight) and Micro Minimosd (running MWOSD).

(Note: This was done using a 27ms flashed D4R-II, YMMV if you aren’t flashed to that.)

First off we need to setup the Taranis to send the RSSI level.  Go into the Inputs section and create a new input for your RSSI. Name it RSSI and set the Scale and Weight both to 100. 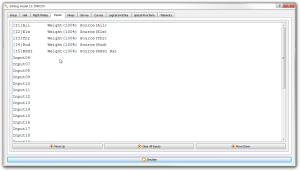 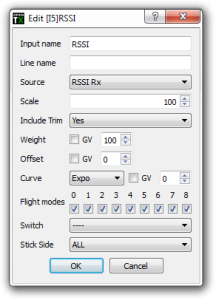 Then on the Mixer section set the Channel you want to use for RSSI (I used Channel 8).  Set the Weight to 200. Then set the Offset to -100.  We’re all done in the Taranis.

Now in Cleanflight Configuration Tab make sure RSSI_ADC is not enabled.

Then go to the Receiver Tab and set the Channel RSSI to what you setup in your Taranis (again back to what I set Channel 8). 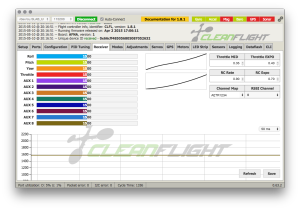 Now on the OSD.  You can use the MWOSD_GUI or directly through your display using stick commands.  Make sure you enable the RSSI and it’s using FC RSSI.  Then set RSSI Min to 0 and RSSI Max to 255.  Don’t forget to set your RSSI Alarm to your desired range.

That’s it, all done.  You should now have the exact RSSI that your Taranis reports directly in your OSD.